By now you’ve probably heard terrible things about Justice League, how it was the most expensive super hero movie ever made (2nd most expensive movie ever made overall) with a budget of more than twice that of Wonder Woman, how it’s had a disappointing opening weekend by every metric, how the Rotten Tomatoes reviews were delayed until after the opening weekend and still bombed and how Henry Cavill’s face was CGI to hide his moustache.

That’s good, because if you go into this movie with appropriately low expectations, you’re likely to have a pretty good time!

Far from the stinker that Batman v Superman: Dawn of Justice absolutely was, Justice League doesn’t climb to Wonder Woman levels of being a good movie, but exactly how not bad is it?

As usual I’ll break it down and score it below, but let’s first acknowledge that of all the super hero movies pumped out in the last decade, at least this one has the most beautifully graphic novel cover inspired movie poster. 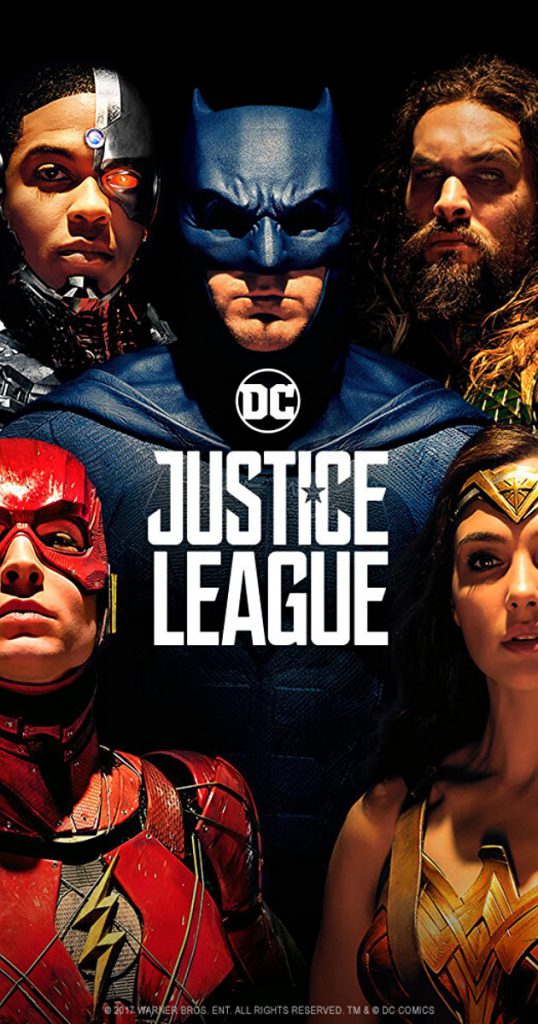 You’ll notice that Superman isn’t in this poster, something that doesn’t make sense in the context of who and what the Justice League are, but you have to try to remember that Warner Brothers and DC actually thought they were doing a good job of pretending Superman was dead in the lead up to this movie… more on that later..

Story, plot, continuity, surprises? Sure, there was some of each or at least passable attempts but the overall movie continuity hinged heavily on the Death of Superman, something that wasn't actually sold to us properly in BvS thanks to the weird ending and the attempt at building an Extended Universe also completely neglects any mention of the events of Suicide Squad.
Within Justice League itself there's not much continuity of power levels, as Wonder Woman and Aquaman in particular look incredibly powerful on their own only to disappoint later on.
These things are fairly minor gripes in the scheme of things and the plot itself is simple enough, but the problem really is in the lack of surprises. While it makes more sense than BvS and Man of Steel, it's also entirely predictable to the detriment of any suspense.

Of the major players in Justice League, only Wonder Woman and Superman have had their own movies to establish who they are as people and as heroes, of the two of them Superman is relegated to cameo and plot device status while Diana gets more low camera angles from behind than meaningful lines of dialogue.
Batman continues to be the most consistent and well fleshed out character under Snyder's direction despite being utterly miserable and the debutants all are barely introduced at all. Of the three, the Flash gets the most character development and dialogue, but considering how little Cyborg and Aquaman are explained or explored at all that isn't saying too much.
Throw in Steppenwolf as the big bad, a character so influential and developed in the comics that he managed a total of 58 appearances since his creation in 1972 and it's no surprise people know more about the Canadain rock band of the same name. For those playing at home, Captain Boomerang (Digger Harkness) has made 328 appearances since 1985.

To be totally honest, this movie never makes it out of second gear. There's no urgency from any of the characters at any time, even when they're supposedly at risk of losing the whole world and the lives of everyone on it.
Justice League might well have the most witty and well written comedic dialogue in any of the DC movies so far, including Suicide Squad and Wonder Woman, but the tone is again far too serious and grim to the point that the movie can't be considered "fun" and only a couple of moments earned a chuckle from the admittedly small audience in my screening, let alone a genuine laugh.
With that said it's not the painful exercise in boredom that BvS was and I enjoyed watching it from start to finish.

This is most of the budget right here, and yet there are plenty of moments that just look wrong or awkward and the questionable costuming choices in some scenes combine poorly with the disappointing army of CGI insectoid space invaders.
Personally I didn't think Henry Cavill's CGI upper lip was that bad, but that might just be because the visuals were the least of the problems with the awkwardly stilted scenes he was in. Oh, spoilers, Superman comes back from the dead in this movie. Sorry.

This one is hard to grade properly, because Danny Elfman put together some genuinely good, if forgettable, music that is very reminiscent of the 90s Batman movies, but the soundtrack plays too strongly to Snyder's lack of enjoyment and fun, making every scene feel serious and tense and sucking the life out of many of the potentially funny and enjoyable moments.
This simmering tension is also probably a major factor in the movie feeling like it settles at the one level for the whole duration with no real drama or climax building outside of the major action spots.

There's no real purpose to this movie, that much is clear. The villain is just a stepping stone to an eventual Darkseid reveal, the scouting and building of the team was set up in BvS and is finally executed here without any complication or surprise, the world is left in the exact same state it started in and the farcical Death of Superman is resolved with a whimper ready to resume where everyone expected the Justice League to be years ago.
This movie lived up to its potential, but that was a very low bar to hit.

Some of the writing is good, some of the performances are solid, some of the action is dynamic and spectacular and that's about it.
The return of Superman wasn't as in-your-face Second Coming of Christ as Snyder could have made it, so I guess that was nice.
Worth watching for the inevitable "heroes fighting heroes" sequence halfway through.

A group of super powered individuals must join forces to stop an alien invasion from destroying the planet.
This time the individuals have already been introduced. This time nobody is panicking about the threat. This time 50% of the team are reduced to being less powerful versions of the main character, who only appears to prove he's more powerful than everyone including the villain. This time the villain is a nobody. This time there isn't much difficulty in bringing the team together, keeping the team together or stopping the villain.
This time it's a direct adaptation of the DC comics New 52 Justice League Issue #1 but without half the protagonists, without the main villain and done 3 years after the animated movie adaptation Justice League: War did it.

Nothing offensive, not too violent for the PG rating, not too cartoony for action movie fans and so simple that none of the existing lead up movies are really required viewing. Not ideal for die-hard fans though or people that like conflict, drama or comedy to make things interesting.

As much as I genuinely enjoyed this movie, I really don't care what happens next and I definitely don't feel the need to watch this one again. The mid-credit and post-credit scenes were both genuinely good, but neither of them made me turn to the person beside me and say "Holy shit, I can't wait".

This is the clearly the best movie Zack Snyder has directed in 5 years. Do not try to compare to The Avengers.