You wouldn’t think much would surprise me in the world of comics anymore, but in the space of a dozen or so pages Captain America: Steve Rogers has made huge changes to not only itself, but Marvel’s Civil War II event.

Off the back of the long September lull before Civil War II Issue #5, Captain America: Steve Rogers has taken all the hope that the previous issue inspired in fans and twisted it back on us like a jagged spike of rubble through the heart.

Where Issue #4 showed us Steve Rogers saving Selvig and plotting to kill the Red Skull, this issue introduces us to Creepy Steve, skulking around behind the scenes of the main Civil War II books and not only placing his loyalty to HYDRA above the friendships of his fellow heroes, but seeming to genuinely despise them. 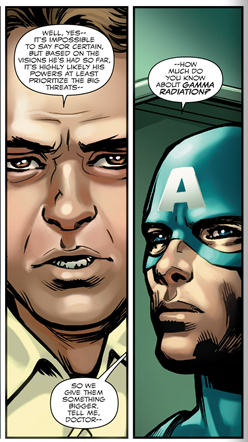 While it’s a classic twist to have friends turning on and even trying to kill one another, the knowledge of just how manipulative and evil Creepy Steve’s schemes have been is a genuine shock that probably should put Kobik’s remade Steve Rogers on the wrong side of redeemable.

With Captain America: Steve Rogers now firmly intertwined with Civil War II, it’s a pleasant surprise to still be seeing more of Elisa, the woman that shaped Steve Rogers’ HYDRA childhood. Already with a darker edge to the flashbacks from last issue, seeing Elisa seemingly with villainous super-powers of her own makes the starkly coloured memories all the more intriguing.

Now that Steve Rogers is remade as a genuinely bad guy (though wisely without ruining the heroics of his true history) and Ulysses‘ brutal visions are coming to a head in both books, could we be about to see a more permanent death of the original Captain America?