Taking Issue With… The US Presidential Election!

Holy global news! Donald Trump is the new President of the United States and the whole world is freaking out.

Not everyone wants to spend their free time forecasting just what the next 4 years might look like or stressing over what this result will mean for them, their loved ones or their bank accounts, so what better way to celebrate the US Presidential Election than with some good old fashioned comic book escapism?

To be fair, there’s enough red, white and blue and iconic white architecture to consider this a timely themed article, but mostly it’s a great opportunity to enjoy some good storytelling and put reality on the backburner for a while.

It’s been a couple of weeks since it came out, but it’s time for Taking Issue With… Civil War II #6 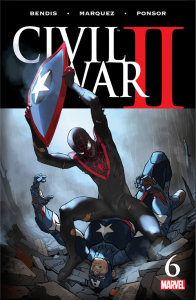 This is a great comic book.

Issue #6 of the Civil War II event doesn’t have the big action moments of the previous issues, but it does a brilliant job of grabbing all of the tension that has been crafted thus far and absolutely nailing the key points from both sides.

There are plenty of tears for the Marquez fans but more importantly it’s an issue that makes you think and feel and leaves you wanting to read the next issue on the strength of character and story alone, not because of a cliffhanger final page. 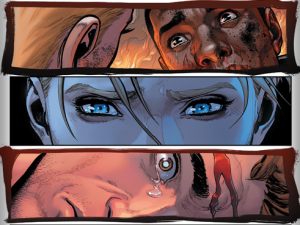 Regardless of which side of the Civil War II event you’re on, this issue is likely to impress, with my head well and truly on the Iron Man side at this point, but Captain Marvel tugging on my heart-strings (which is totally counter-intuitive to the arguments they’re championing, but I like to be kept on my toes).

Despite how solid the major players are in Civil War II #6, the absolutely highlight for me is the moments that might just herald a third, totally awesome, Young Avengers style faction splintering off from the old hands, complete with new character introductions, sort of… 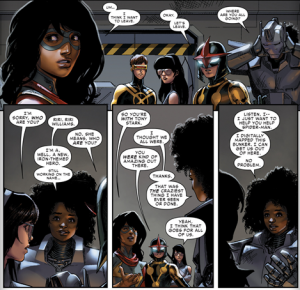 When it comes to the old hands though, what better way to further examine the events of Civil War II #6 than with the double-header: Taking Issue With… Captain America: Steve Rogers #6! 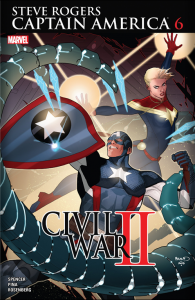 With Steve Rogers stepping front and centre in the main Civil War book, the sixth issue of his tie-in series spends a good chunk of time retelling the major scenes with Steve as the focus. 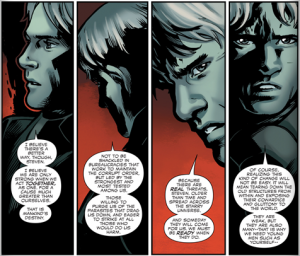 Add to that some politically charged but definitely evil flashbacks to young Steve’s HYDRA childhood and a one on one between Steve and Tony that raises some of the questions that long-time Marvel readers are definitely asking, and you’ve got yourself the ideal companion issue to further enhance the Civil War II series.

I’m not going to go so far as to draw comparisons between President Trump and the HYDRA Whitehouse, but with comics as good as these two it’s safe to say that Marvel are telling a much more entertaining and enjoyable story than 2016 politics is serving up, so invest in comics and get reading!